The Artist known as LuLu LoLo

Portrait of LuLu by Vince Evans / Photo by Paul Takeuchi
For this week's entry, we touch base with one of our favorite performance artists who recently returned from France. Allow me to introduce LuLu LoLo, or should I say the Fabulous LuLu LoLo. She was part of Art in Odd places 2009: SIGN. Unlike last week's artist who used silence to communicate, LuLu LoLo utilizes an active approach to attract people: her larger than life personality. What makes Art in Odd Places such a wonderful event is the idea of embracing such creative differences in approaching themes. And rest assured, the festival will continue to capture this idea of "unity through diversity" this year.

You wonder how LuLu LoLo's approach worked? Read on.

Aiop: What’s in the name?
LL: LuLu LoLo is my name. My Italian grandmother called me LuLu. As Twayla Tharp says in, “The Creative Habit, Learn it and Use it for Life” ‘There is a magic and power invested in our names…done wisely and well, a change of name can be a self-fulfilling prophecy.’

AIOP: Kindly share your Art in Odd Places experience?
LL: My performance for AIOP on 14th Street as 14th Street NewsBoy— was very exciting—because of the wonderful response from the many people who stopped to take one of my newspapers about the history of 14th Street. Each week I gave out over 300 newspapers—because there were different issues, people were emailing to get the next issue if they missed meeting me in person. I performed on the corner of University and Union Square— in front of the Strawberry Store down the street from Whole Foods. It was interesting to see what type of person took my newspaper—young or old—male or female—student—I wish I had made a study of the demographics of who took my newspaper. Also by shouting out an intriguing headline I was able to get someone who resisted to take my newspaper—some of my favorite headlines that I would shout were: “Oscar Wilde’s play was a flop!” “Lillian Russell’s mother ran for Mayor! First Woman to run for Mayor—she got 4 votes!” “Oscar Wilde swindled by a Bunco Artist” –By engaging the people walking by—they would stop and take a newspaper. I would have returning people who said—“Oh I loved the last issue—can’t wait to read the next.” When I thought of my performance on 14th Street—I knew a lot of history of 14th Street but as I researched the history of 14th Street---I learned so much that I wanted to share this history—and I thought of a newspaper—my biggest problem was editing the wealth of images and information that I collected about 14th Street. 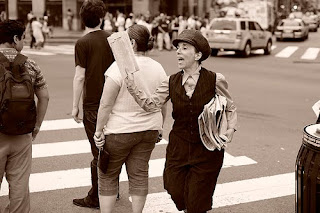 Photo by Paul Takeuchi
Aiop: Any words of wisdom for artists who are interested in becoming part of this year's Art in Odd places festival?
LL: My words of wisdom are really think about location and time of day of your performance. Early morning as people are going to work—they seem focused on getting on the subway—I thought they would want a newspaper to read going to work—but they seem more leisurely when they returned from work. People going to the Greenmarket on Saturday morning were very relaxed —and happy to take a newspaper which I had to stuff into their overflowing Greenmarket shopping bag. Do not stand by bus stop—too noisy—think of traffic noise—Also people are either listening to music or talking on cell phone—so they don’t hear you or notice you. If you are giving them something—they won’t take it if they think it is a store promotion. You should stand at a spot you are thinking of selecting—and get the feel of the kinds of people that pass by and the time of day which seems best for their interactions with your performance.

Aiop: Sounds like a moving performance. If you had to do it again, what would you have changed about your piece?
LL: I think I should have been at same spot at the same time each week—as people wanted to find me for the next issue—I staggered the time to see what kind of response I received at
different times.

Aiop: This year’s theme is Chance. What is your take on the theme?
LL: All of my work is about Chance: An encounter on any street in any city in the world, where strangers spontaneously interact with me as I appear as one of my many personas. Even my
scripted theater plays have an element of chance—as I sometimes improvise the dialogue each evening. Being a performance artist is taking a “Chance”—a risk. Michel Seuphor (author of “Piet Mondrian, Life and Work”) said, “Art stands still if you are afraid to take a chance.”


Aiop: Tell us about your work as an artist
LL: My work alternates from performance art to scripted one-person plays based on history. Recently I performed an excerpt from my play: “Soliloquy for a Seamstress: The Triangle Shirtwaist Factory Fire” at Judson Church for the 99th anniversary of the fire. I am involved with www.rememberthetrianglefire.org our coalition is developing projects for the 100th anniversary in 2011. 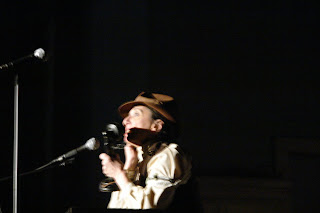 Performance at Judson Church. Photo taken by Iris Selke
Recently, I was in France—where I performed a few days ago in LeMans France—a series of performances for the Ghost Art Gallery “Les Errances de l’eau a Le Mans” “The Wanderings
of the Water” an exhibition connecting LeMans France and Campagna, Italy. 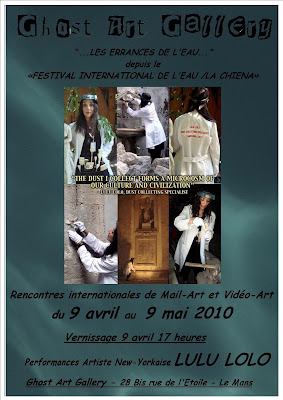 My performance was “The Cosmic Grand Prix” uniting two miniature racing cars—one carrying water from the town of Campagna, Italy and the other street dust from LeMans. Continuing my performance work as LuLu LoLo, Dust Collecting Specialist, (The dust I collects forms a microcosm of our culture and civilization). I collected dust in the City of LeMans, encasing the sacred dust in a precious vial attaching it to one of the racing cars. In the performance the two cars raced around the gallery. At the finale of the Cosmic Grand Prix the sacred water and the sacred dust carried by the Cosmic Race Cars were sprinkled on site by LuLu LoLo as an act of consecration for the healing of the Earth.

Aiop: Please let our readers know about your upcoming projects? LL:
April 24- Participating in “Wherever There is Water Night Parade” in Philadelphia,
www.fleisher.org/exhibitions/water.php
www.whereverthereiswater.blogspot.com
April 25- A performer at the Fund Raiser for Revolution Books, 146 W. 26th Street 5-8 pm
May 13- “You Know Who I Am: A Tribute to Leonard Cohen”, Conceived and realized by Joel Allegretti performed by Davidson Garrett, LuLu LoLo, and Jane Titus, Cornelia Street Café,
29 Cornelia Street, cover $7 (includes one house drink)
June 1-4- LuLu LoLo Dust Collecting Specialist with Sean Miller and the John Erickson Museum, www.jema.us at the Musei
di Nervi - Raccolte Frugone, Genoa, Italy
Summer 2010: “Dust from My Ancestral Homeland: An Act of Immigration Reinvented” continues my work as a worldwide Dust Collecting Specialist celebrating the mystical nature of dust. I will travel to Southern Italy to the home towns of my grandparents who emigrated from Melfi and San Fele in Basilicata collecting dust particles from churches, palazzos, statues, fountains, etc . These dust samples will be displayed at the Spazio Utopia Gallery (Campagna) as Immigrants gathered for departure to America and brought to New York docking at Ellis Island where the samples will be arbitrarily admitted for entry or rejected. The samples admitted will settle in East Harlem, NY at the sites where my grandparents lived for a unifying street performance. Also in Italy I will be “Basilicata NewsBoy” hawking a free newspaper about the Italian immigrants in New York City and highlighting the work of my parents, community activists who devoted themselves to the community of East Harlem—the street I live on in East Harlem/El Barrio is named for my father: Pete Pascale Place.


Aiop: Thanks LuLu! You certainly have lots of interesting things to say!

For more information about this vivacious performer, visit her website www.lululolo.com. I can assure you the website definitely doesn't disappoint.

Do you think you have what it takes to show a compelling piece along 14th street? Take a "CHANCE" and submit a call for artists application available here

Come back next week as we feature past Aiop artist, Tattfoo.

Posted by packingsheet at 7:23 PM